To Market To Market… 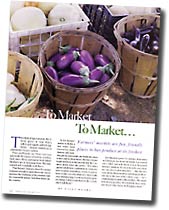 Farmers’ markets are fun, friendly places to buy produce at its freshest

Article in the Summer 1997 issue of Annapolis Quarterly

The blush of ripe tomatoes, the vibrant green of snap beans, yellow-gold squash, and red raspberries—farmers’ markets are so colorful they’re part rainbow.

They smell good, too. Close your eyes and inhale the essence of melons, peaches, basil, mint, chives, and maybe fresh-baked blueberry pie or cinnamon buns. Bite into a peach and it explodes with flavor.

That farmers’ markets cheer the senses is reason enough to seek them out, not to mention the freshness of the produce and the reasonable prices. And then there are the vendors.

At the farmers’ market in Berlin, a few miles from Ocean City, Judy Ashton sells bedding plants, perennials, and herbs she raises In her yard on Main Street. She has a hearty laugh and loves to kid around, but she’s serious about what she grows. “I’d rather spend a half hour explaining to someone how to plant something, where to put it, how to take care of it, than have them walk away not knowing. I work real hard to grow my things. I don’t want them to die a week after I sell them.”

Jim Bennett grows 14 varieties of peaches on Delaware farmland his family has owned since 1867, and sells them at four Maryland farmers’ markets. Even as he tells you about the travails of cultivating fruit — like the two years all the blossoms froze and dropped off, resulting in the loss of his whole crop—he’s emphasizing his pride in his product. “We stand behind our peaches. If somebody buys some and doesn’t like them, we’ll replace them.”