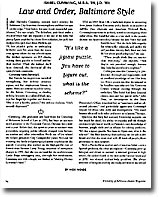 Isabel Mercedes Cumming, assistant state’s attorney for Baltimore City, leans into the microphone and fixes her eyes on the judge. “Your honor, the state would request full punishment,” she says crisply. The defendant, pink-faced under a cloud of white hair, sits impassive at the end of the table, her plump figure amplified by a loose flowered jacket, her puffy feet wedged into open-toed shoes. Patricia, age 50, has pleaded guilty to embezzling $210,462 over five years from the insurance agency where she was a bookkeeper. She falsified signatures on 219 checks, making them payable to herself and her dead mother. When she realized she’d been detected, she destroyed all the agency’s bank statements.